Most of you may know that Al Gross invented the citizens band radio, also known as the CB Radio, in 1948. Al was also the inventor of the walkie-talkie, which preceded his radio invention. His other innovations include the basics of cordless and cellular telephones.

The CB radio originated in the United States when the Federal Communications Commission created the Citizens Radio Service for regulating remote-control units and mobile radiotelephones.

The original CB radios were designed for operation on a 460-470 UHF band and were limited to a smaller frequency range.

When CB radios first started, a series of "10 codes" were used since the early CB radios needed to warm up before use. The ten codes were used as a shortcut to longer standard messages. A few of the more often used codes are:

A typical CB radio consists of a combined transmitter-receiver and an antenna. In the United States, a CB radio has 40 channels, at frequencies from 26.965 to 27.225 megahertz. 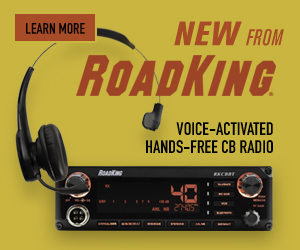 In the 1960s, the CB Radio became popular with taxi cab companies to communicate with their drivers.

CB radios hit the mainstream in the ’70s when truckers began to use them to communicate speed traps to other drivers when the speed limit was lowered to 55 mph for safety and to help with the gas shortage. This also resulted in several movies around trucking, including Smokey and the Bandit and Convoy, and increased the popularity of the CB radio. Even the first lady has a ‘handle,’ Betty Ford was “First Mama.”

CB communication also aided those in trouble. Channel 9 was designated the emergency station.

The CB radio is still widely used in rural areas where cellphone service is weak or unreliable. Off-roaders also communicate between drivers in a group or four-wheel vehicles via their CB’s.

CB technology has changed little in the last few decades but recently RoadKing launched a new Hands-Free CB radio bringing the CB radio into the 21st century. This radio provides a seamless transition between your CB radio, smartphone, and Bluetooth headset with one touch.

While today many truck drivers may not use the CB radio as often as they once did, it is still considered one of the most essential pieces of equipment to have in your truck. Cell phones may have become the more popular form of communication among drivers but there is still a need to use the CB to warn drivers on travel conditions, hazards and delays or to be warned by other drivers of what is coming.